Jodie Simpson, Executive Director of Goodness PR, casts her eye over some of creative offerings from the past seven days.

This week, our Executive Director, Jodie Simpson was invited to share her thoughts on some of the industry’s most creative campaigns from the past days with PRWeek. Read the full article below.

What a week! If we weren’t rushing to a forecourt to fill up our tanks, we were rushing to the closest cinema to fill up on a dose of 007. Maybe the social media blackout was some kind of enforced downtime?

And talking about disrupting us, I have to give a nod to the brilliant dating app Thursday, which is not only shaking up the market with its approach to dating, but also having a whale of a time with its marketing too.

I mean, I challenge any intern to be as creative with £25 as this one, who was challenged to use the money to generate 1,000 downloads. Bravo to you, we hope you did it.

But for this week, let’s first turn to the world of fashion… 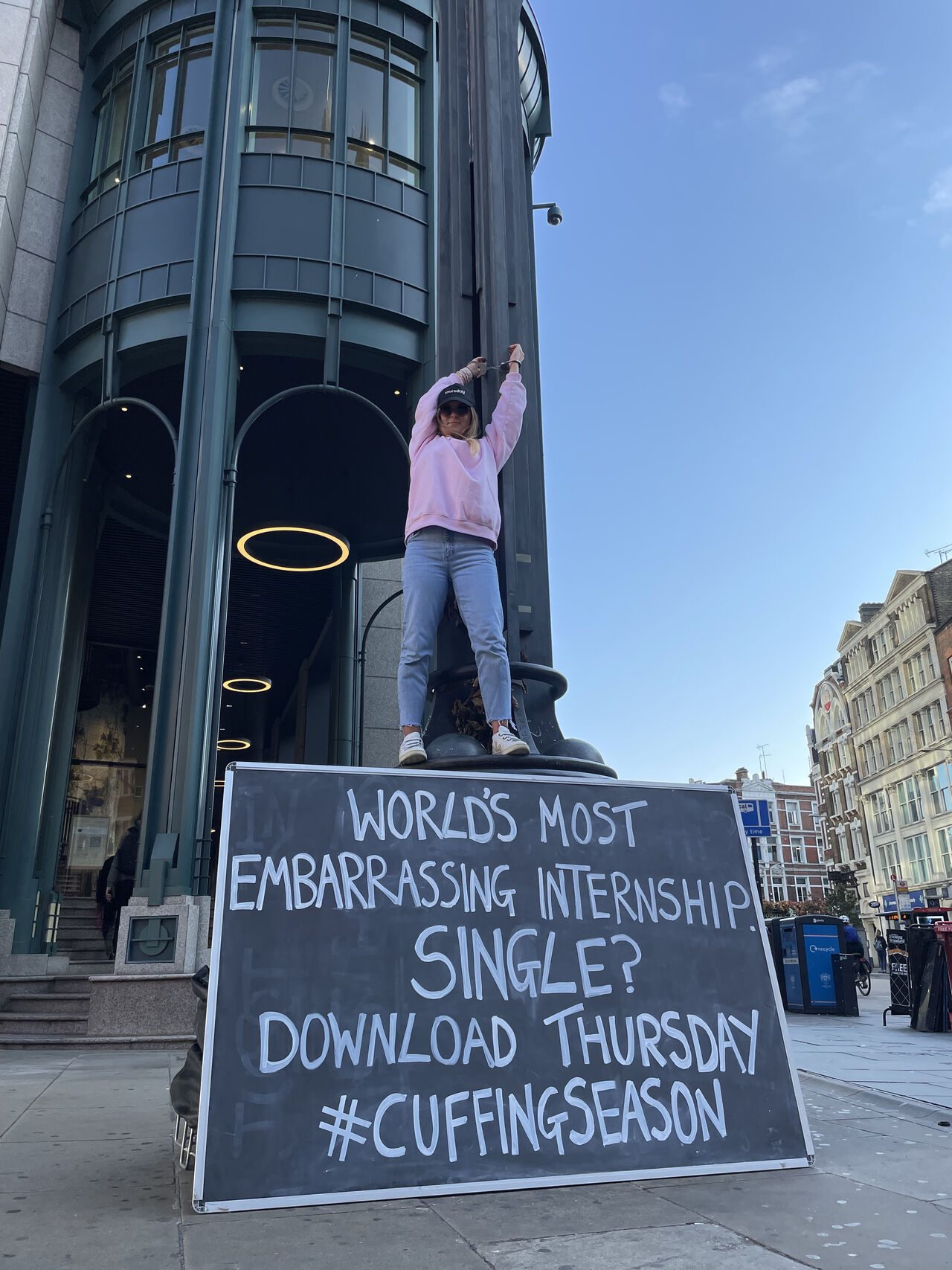 Whether you love or hate it, this is one brand you can’t ignore. It has literally taken catwalk strides ahead of other fashion houses in terms of innovation, and is winning the race when it comes to bridging the gap between couture and culture. Balenciaga has created virtual reality catwalk shows and partnered Epic Games on the very first Fortnite luxury fashion collaboration, but this weekend it took it up a notch by showcasing its Spring/Summer 2022 collection in the form of a 10-minute episode of the Simpsons.

This one has divided opinion, but between you and me, anything with the Simpsons in is a win. If you haven’t already watched the 10 minute short, please do – it’s wonderful in every way. The script is ace, Marge and Homer on the catwalk is everything, and the casting outside of your usual Springfield suspects is excellent, with fashion royalty taking on silly and light-hearted personas.

I love this; it puts fun into fashion and makes it playful and accessible. The video was viewed over one million times within 24 hours and has been covered across the globe, which shows us that this really is a hit. For me, this is a great example of a high-end brand being relatable and accessible and a reminder that we shouldn’t take ourselves too seriously – not to mention it’s completely unexpected. It’s a big breath of fresh air for the fashion industry, and hopefully popped a smile on the sunglass-wearing faces of the FROW.

We love a campaign with purpose at Newsfeed and this one really jumped out. Depressing as it is, words alone often fall on deaf ears, and climate issues are now so big and so immediate that visualising the impact our actions have on the world is the most impactful approach. Greenpeace’s Wasteminster campaign did this brilliantly earlier this year, and Oddbox has hit the same notes with its recent ‘Wasteland’ campaign.

To mark UN International Day of Awareness of Food Loss and Waste, the fruit and veg box delivery company applied for a country that it founded (aptly named, Wasteland) to become a member state of the UN.

This is another great example of a brand amplifying an issue through visualisation. It literally put Wasteland on the map, showing that, if food waste were a country, it would be the third-largest contributor to greenhouse gas emissions, after only China and the US. It’s visually arresting and is underpinned with some shocking stats (‘40 per. cent of all food produced goes uneaten’). And, should it get a seat at the table, it has developed a manifesto, which is a super-smart way of communicating its goals.

As a brand it can 100 per cent own this topic (number-one rule) and it’s not just talking about it, it is taking serious action to try to get food waste on the global agenda. We think this campaign is a brilliant way to kick-start the conversation at a higher level, and we hope this makes the agenda at COP26 in November – good luck.

Hello, it’s me… is it you Adele? We’re not sure. But I’m hoping it is, because if it is, you’ve sorted out my dad’s Christmas present. If you don’t know what I’m talking about then you’ve somehow managed to miss the teaser ’30’ campaign, which is gaining momentum – and at the time of writing, the number ’30’ has been spotted on billboards or via projections in 16 cities across the globe. The word on the street is that this is a teaser campaign to launch her third album – each one apparently named after the age she was when she started writing it.

This is a lovely, good old-fashioned teaser campaign. It’s simple in its execution (the best ideas usually are), although I’m not saying it wasn’t a logistical nightmare. I think this might make many of us feel better for popping a billboard/projection idea into a client deck, but the scale, the timing and the simplicity (Adele is big enough to be known by a lone number) is what really works for me. As I type this Adele has changed her social channels to match the colour tones of the ’30′ billboards, and social media is going nuts… so well done for getting us ‘chasing pavements’ for the next sign of the release.

Now, don’t get me wrong, I have nothing against kissing, but I’m not sure I’m a fan of the Kiss at First Sight kissing booth that Wrigley’s opened this week. According to the chewing gum brand, 57 per cent of adults have lost confidence in kissing throughout lockdown, and the booth was a chance to lock lips with a stranger to get your kissing game back on.

I actually love the advert that Wrigley’s released this year (‘For When it’s Time’). It has loads of kissing following our freedom from lockdown and it’s set to a great tune – lovely.

Watching strangers gearing up for a smooch gives me the ick

But bringing this idea to life with the general public doesn’t work for me. Watching strangers nervously gearing up for a smooch makes me want to divert my eyes and gives me a bit of the ick.

This article was first published in PRWeek. Click here to read We’ve partnered with the School of Communications Arts 2.0